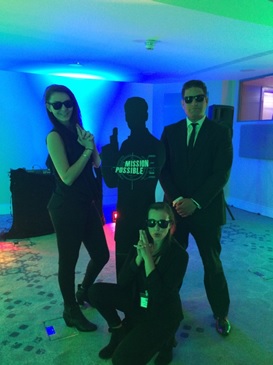 Marriott is one of the largest international hotels in the world, located in the largest of cities all around the globe! Their event spaces are versatile, varied, accessible and at competitive prices – a really popular venue for our clients!

Every year Marriott Hotel put on an event to thank their best agencies for all their enquiries that year. This year Crazy Cow’s Lottie and Ellie had the pleasure of attending the Marriott in Kensington’s ‘Mission Possible’ event, followed by a complimentary stay in their deluxe suite!

Since we were invited 2 months prior, we were advised to complete several virtual ‘missions’ via email for a chance to win the price of a whole Marriott Bedroom! (The furniture too, not just the bed!). This exciting and fun lead up allowed us to understand the full spectrum of events that Marriott hold at their venues as well as get us excited about our stay there

As well as being in a central location, Marriott Kensington was chosen to coincide with the ‘launch’ of their new functions rooms.

On arrival we were greeted into the hotel and shown our room for the night, followed by a ‘secret agent letter’ informing us of the meeting point, dress code and desired time.

Donning our Spy gear, we entered the function room which had been transformed into a ‘Secret Agent Hideout’ consisting of ‘security checks’ and scans on arrival!

The evening was introduced accompanied with a scrumptious buffet and a large variety of homemade cocktail stations, attended to by Marriott event coordinators from around the country!

Of the 40 that were invited to this exclusive event. We were split into groups to complete ‘top secret missions’ which allowed us the network amongst the intimate groups.

(Ellie, left and Lottie right in our Spy Team hats!)

The overall winner (unfortunately not us) won a Marriott Bed! And we all celebrated the evening with dessert.

The event then continued with DJ & dance floor into the early hours of the morning for the hardcore party goers that night!

The Breakfast buffet was also served complimentary to our stay which was enjoyed thoroughly.

The event was certainly one to remember, and really demonstrated the diversity and flexibility of the event spaces within the hotel. Thank you Marriott we look forward to partying with you next year!!